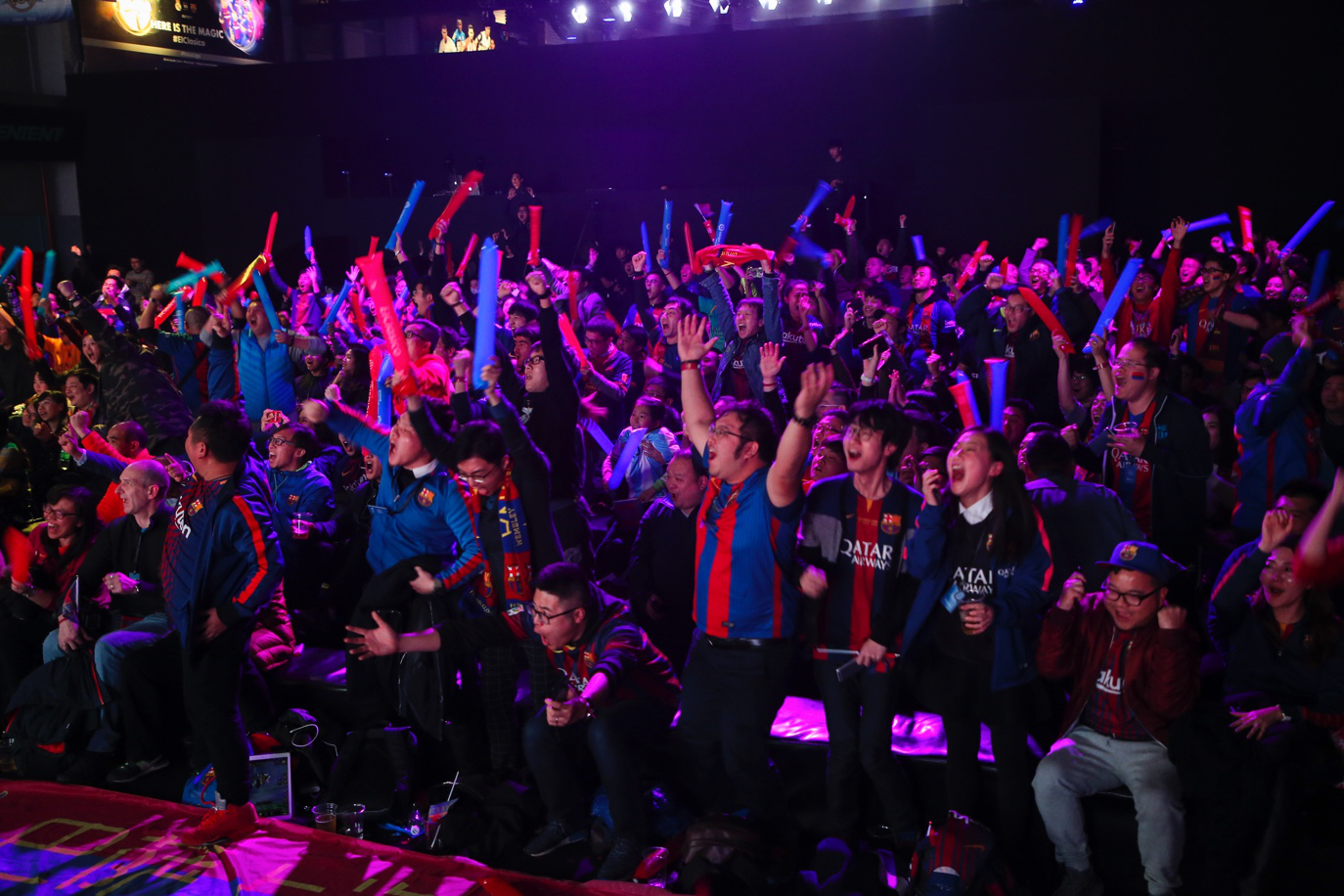 On December 23rd, 2017 LaLiga fans in China gathered to watch a live-stream of the high-profile derby between F.C. Barcelona and Real Madrid C.F., started at 20:00 (BJT), ‘El Clasico’ at Shanghai’s World Expo Huangpu Sports Park. For the first ever super-prime-time broadcast of ‘El Clasico’ in China, both old and new fans came together in a celebratory atmosphere. Captured through over thirty units of 4K cameras inside the Santiago Bernabéu stadium, fans were treated to a perfect entertainment spectacle. At the event, attended by former F.C. Barcelona and French national team football player Eric-Sylvain Abidal, now LaLiga ambassador; Wang Da Lei, Ambassador of LaLiga official time keeper TAG Heuer, several exciting developments were announced.

Photo: Fans and attendees watching the live-broadcasting of El Clásico

Ahead of the El Clasico, LaLiga Club held a press conference on the theme of "It’s not football, It’s LaLiga". LaLiga Greater China Managing Director Sergi Torrents said: “We presented our finest Spanish El Clasico to Chinese football fans, media partners and VIPs in such extraordinary way. LaLiga has not only the most wonderful football games, it is also the symbol of passion, entertainment and high-technology. that's the real connotation of 'It’s not football, It’s LaLiga.'"

Reinforcing this motto, LaLiga Club announced a TV series with ‘China Dream, Football Dream’ theme – called “Greenfield of Love”. The TV series launched with MGTV and Activation Group is set to be broadcast through major mainstream media in late-2018. It will be a story about family, friendship and sportsmanship, an epic inscribed in sweat, challenges and love. In the series, three passionate and talented young people with the same goal will come together to win their way to the CFA Cup Final. Lin Hai Tin Tao, a top-tier scriptwriter in China, will act as script consultant for the series, working in conjunction with Untalented Writers Studio.

Photo: Group photo of all the executives in attendance

Speaking of the uniqueness of the LaLiga Club Elite Training program, the General Manager of Activation Sports, Kathy Zhou added:” The LaLiga Club’s training has successfully landed in Shanghai and Beijing. The upgrading elite training program provides professional training methodologies that opens up new opportunities and additional channels to send talents to LaLiga.”

LaLiga has been committed to pushing forward the development of China football. Since 2015, LaLiga has been collaborating with China’s Ministry of Education and the China Education Association for International Exchange (CEAIE), and have built up a close relationship throughout the cooperation. Through the ongoing program, LaLiga has dispatched 90 football coaches to over 100 public schools, where over 150,000 children have benefitted from top-level mentoring from LaLiga training coaches. This collaboration along with the LaLiga Club Training underlines LaLiga’s commitment to the next generation of Chinese footballers and builds on work already accomplished in the country.

“LaLiga club is committed to developing and creating a 360-interactive platform for fans experience. It will be marketed through a range of initiatives to reach out to target audiences, from online and offline promotions to professional club operations. The combination of several factors will create a perfect LaLiga experience and atmosphere - a comprehensive sports offering that will appeal to the widest possible market.”, Steve Lau, the managing director of Activation Group added.

Photo: LaLiga fans gathered together to watch the El Clásico

The first ever super-prime-time broadcast of ‘El Clasico’ in China was celebrated in spectacular style. The latest LaLiga technology allowed the perfect viewing experience for the fans with videos, photos and exclusive content linked to the fixture’s illustrious history. LaLiga will continue to serve up a range of novel, immersive experiences and activities that bring Spanish football closer to local fans, capturing the interest of a broader market. “It’s not football, It’s LaLiga.”

Founded in 1984, LaLiga (Liga de Fútbol Profesional) is a sports association comprising 42 teams that make up the first and second divisions of professional football in Spain. LaLiga, based in Madrid and with a permanent office in Shanghai, is responsible for the LaLiga Santander and LaLiga 123 leagues and the television production, which in the 2016/2017 season reached more than 2.5 billion people globally. The association also has an active foundation and is the world’s only professional football league with a league for intellectually challenged footballers: LaLiga Genuine.

In October 2016, LaLiga and Activation Group set up LaLiga Club in China to bring the pure Spanish football experience to LaLiga fans and open channels for sports lovers to understand and experience LaLiga culture. LaLiga club is committed to developing and creating a 360-interactive platform for fans experience, LaLiga fans in China connect with Spanish football experience. With the continuous development of technology, more channels for sports enthusiasts to understand and experience LaLiga culture will be created by providing a variety of innovative and unique entertainment and leisure options.

As the marketing strategy leader in Greater China, Activation Group also possesses experts in sports fields, management experience in large-scale outdoor projects, cutting-edge digital technologies and a comprehensive coverage of media and social network resources across the country and overseas. Not only do Activation Group organize the Chinese race of ‘Le Tour de France’, but they’ve also established together with LaLiga the high-end football platform of LaLiga Club to further promote lifestyle upgrade in the areas of entertainment and sports.

Mango Entertainment is a full media entertainment content production company which owned by Hunan Radio and Television Group. It has a strong platform for film and television production team, promotion team and mango ecosystem, and continuously develops high-quality content. They aim to make effort to explore the most influential content among young audiences and lead the young generation in the world to form positive entertainment values. Adhering to the brand spirit of "just being young," we will strive to create a comprehensive media company with social responsibility and social influence.